The new covenant Passover sharing with people in the world

Despite difference in nations, races and languages, so many people all around world pay attention the new covenant Passover in the Bible. Why? That is because the only way to receive salvation is the Passover with flesh and blood of Jesus. So we have to know teachings of God only through the Bible, not people’s teachings.

The Passover is the feast that contains the meaning, “Disasters pass over.” It falls in March or April by the solar calendar. It is originated from the Exodus 3,500 years ago when the Israelites kept the Passover according to the word of LORD. As a result, they were protected from the great plague of killing the firstborn and released from slavery in ancient Egypt (Exodus 12).

Following the Bible, the Church of God (WMSCOG) observes the Passover of the new covenant holy every year. As Christ Jesus washed the feet of his disciples before the Passover, WMSCOG holds a foot-washing ceremony before the Holy Supper of the Passover.

The restoration of the truth in the Bible

Christ Jesus came to this earth to give salvation and eatablished the truth of the new covenant Passover. But the teachings of the new covenant that Christ gave were completely disappeared by Roman church in A.D325. After that, in A.D 354 the Roman Church changed birth of sun as Christ Jesus’ birth, introduced the cross that was a frame of the death of penalty into church in A.D 431 and hung the cross on the top of church in A.D568. In this process, the church of God that Jeusu established was entirely gone, churches were filled with pantheists and sun worship. Roman Catholic showed off strong authority from politics to all field during the Dark Ages.  What’s worse, the corruption and depravity of Roman Catholic finally reached selling indulgences.

To recover the truth of salvation disappeared by Roman for 1,600 years, God must come again. 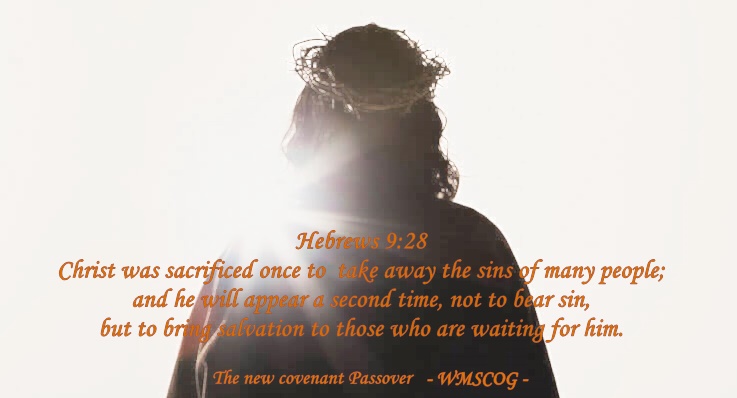 The recovery of THe new covenant Passover

Today all men in the world are living on this earth without realizing the truth of salvation. The Christ Jesus as the truth of the Lamb of the new covenant Passover died upon the cross instead of sin of all men. Because of sacrifice of Christ Jesus, men are no longer associated with sin, so it is truth that we can receive the eternal life through the new covenant Passover.

Corin 5:7 Get rid of the old yeast that you may be a new batch without yeast – as you really are. For Christ, our Passover lamb, has been sacrificed.

The Church of God is the only church nowadays that keeps the Passover of the new covenant according to the Bible. The church observes the seven feasts in three times annually: The Passover, the Feast of Unleavened Bread, the Resurrection Day, the Pentecost, the Feast of Trumpets, the Day of Atonement, and Feast of Tabernacles. Each feast contains the blessings of God such as eternal life, forgiveness of sins, resurrection, and the Holy Spirit. The second coming Christ has restored all the truths of early church of God. It is Christ Ahnsahnghong who is our savior. That is the reason why many people all around world pay attention the new covenant Passover in the Bible. Please come to WMSCOG and hear the good news, the New Covenant Passover.

42 thoughts on “The restoration of the truth, The New Covenant Passover – 24 [WMSCOG]”